If we could measure poverty by gender, what would we find?

January 19, 2017 Gender, Human Rights, Inequality Comments Off on If we could measure poverty by gender, what would we find? 3,422 Views

Poverty is usually measured at the household level, and since there is pretty much the same number of women as men in each household, poverty rates have almost by definition been identical for men and women. This fact, however, has not prevented thousands of articles from claiming that “poverty has a female face” (1). The perception that women are more likely to be poor is almost universal, despite the lack of empirical evidence.

While the evidence of a gender wage gap is very strong everywhere, a gender wage gap does not automatically translate into a gender poverty gap, as families tend to share resources and obligations within the household. Without very detailed, and incredibly personal, information about what is going on within each household, it is very difficult to calculate intra-household poverty measures.

I would not recommend that household surveys try to get into the nitty-gritty details of family life, although everybody involved might find many of the questions and answers hilarious. Instead, I would try to infer gender differences in poverty from other sources of information.

For example, gender differences in poverty would likely show up as gender differences in the nutritional status of children, as poor children would probably not receive as good nutrition as non-poor children. Such information is readily available at the individual level from demographic and health surveys (DHS) in the form of Height-for-Age Z-scores (HAZ), which measure chronic malnutrition. Chronic malnutrition in early childhood has been empirically shown to have lasting adverse effect on performance in school, years of education, lifetime earnings, adult health, and even the health of offsprings, so this is a very relevant indicator to analyze in order to understand poverty in its many dimensions.

As a first step in this direction, I calculated gender differences in HAZ scores for 0-5 year olds in all the countries that have carried out Demographic and Health Surveys (DHS) with anthropometric measures of children (and that have made the data publicly available through the DHS website). In total, I analyzed 178 surveys, of which only four showed a significant gender difference in favor of boys (Bangladesh 2007, Bangladesh 2011, Nepal 2006 and Turkey 2003-04). All the other surveys showed either no significant difference, but more often a statistically significant advantage for girls.

The simple average difference is 0.1 standard deviations in favor of girls. This is not a big difference (just a few millimeters, actually), but it is enough to make a significant difference in malnutrition rates. For a typical country in the middle of the distribution above, such as Bolivia, this difference means that chronic malnutrition rates are 22% higher for boys than for girls (15.6% for girls versus 19.0% for boys, in the case of Bolivia in 2012). 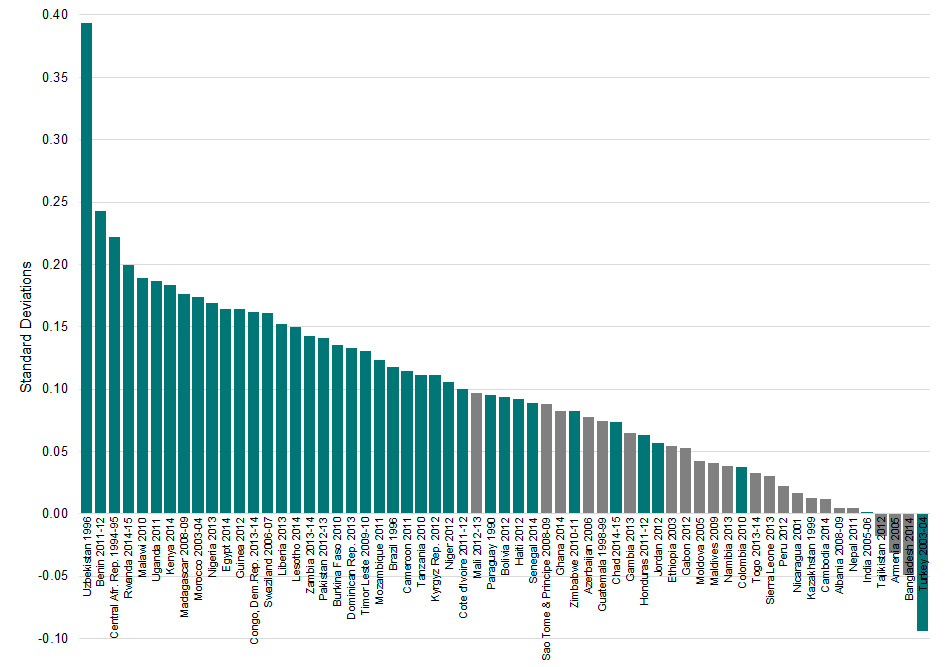 Although not all other things are equal everywhere, the disadvantage of boys in school shows up in test scores almost everywhere. Of particular concern is the share of children that are underachievers in all key subject areas (reading, science and mathematics) simultaneously, as these would be more likely to fall into poverty than children who perform well in at least some areas. According to Figure 2, derived from the Program for International Student Assessment (PISA), boys are more likely to be underachievers in all subjects in all participating countries (except in six countries, where the difference between boys and girls is not statistically significant). In many countries, the difference between boys and girls is very large. In Jordan, for example, 55% of boys are underachievers, while this is the case for only 26% of girls. Even in Finland, with an outstanding education system and few underachievers in general, there are about twice as many underachieving boys as underachieving girls (see Figure 2).

Figure 2: Gender differences in the percentage of students who
are low achievers in all subject areas simultaneously 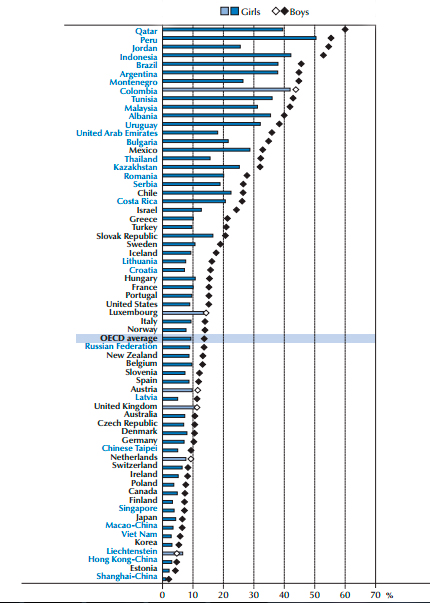 Source: Figure 1.2 of OECD (2015) The ABC of Gender Equality in Education: Aptitude, Behaviour, Confidence, PISA, OECD Publishing. http://dx.doi.org/10.1787/9789264229945-en.
Note: Gender differences that are statistically signi­ficant are marked in a darker tone. Countries and economies are ranked in descending order of the percentage of boys who are low performers (below PISA pro­ficiency Level 2) in reading, mathematics and science.

The superior performance of girls in school, when given a chance, is slowly translating into an advantage in university enrollment as well. By now there are more women than men enrolled in higher education worldwide, and the women generally get better grades and are more likely to graduate than men (2).

Another way to get at gender differences in poverty rates is to analyze mortality data. At any given age, you would expect poor people to be more likely to die from some problem (diarrhea, crime, accidents, cancer, etc.) than rich people. Age-specific and cause-specific mortality rates can be conveniently summed up in just one widely available indicator, namely Life Expectancy at Birth, which indicates how long a person being born now would live if current age-specific mortality rates remain constant throughout his life.

Globally, Life Expectancy at Birth is higher for women than for men by an average of 4.2 years (69.4 years for men versus 73.6 years for women, according to the World Bank’s World Development Indicators for 2014). Figure 3 shows that the female advantage is almost universal, with only two out of 203 countries showing a slight advantage for men (Mali and Swaziland, with men living 0.4 and 1.4 years longer than women, respectively). This difference means there are many more old women than old men in the world. For example, about 82.8% of all US centenarians are female (3).

Source: Author’s elaboration based on data from the World Bank’s World Development Indicators.

In summary, girls start life with a small nutritional advantage compared to boys, and they manage to turn that nutritional advantage into an educational advantage and a general health advantage for the rest of their lives. Men still have an advantage in sheer size and muscle power, due to their testosterone boost during adolescence, but that advantage is going to be less and less relevant in a world where machines are taking over most manual work, and where sophisticated and creative thinking is getting more important.

My guess is that if we could measure poverty by gender, then we would find that men are poorer than women are, and that the gap is increasing over time, but with some potentially interesting differences between countries.

* Lykke E. Andersen is a Senior Researcher at INESAD. She greatly appreciates feedback on this post either in the comments below or directly to landersen@inesad.edu.bo.

The views expressed in this article are those of the author and do not necessarily reflect the views of Fundación INESAD.

By: Lykke E. Andersen* Economists distinguish between open and hidden unemployment, and I think it …