Who are the NINIS (out of school and out of work) in Bolivia?

January 23, 2018 Education, Labor Economics Comments Off on Who are the NINIS (out of school and out of work) in Bolivia? 1,618 Views

The NINIS phenomenon (that is, young people who neither study nor work) is gaining relevance in the academic debate. However, the meaning behind this word is still a black box with many theories about its content. At one extreme, NINIS are imagined as lazy young people who spend their time playing video games, watching television or doing other unproductive activities. At the other extreme, NINIS are perceived as young people without opportunities for getting education or having a job. Therefore, they are in a kind of social exclusion.

In practice, both perceptions can be correct, given that young people are NINIS for many reasons. Furthermore, they can be NINIS in a short, medium or long run. Table 1 presents data for Bolivia (based on the Household Survey 2015), which permit to highlight various meanings of NINIS. 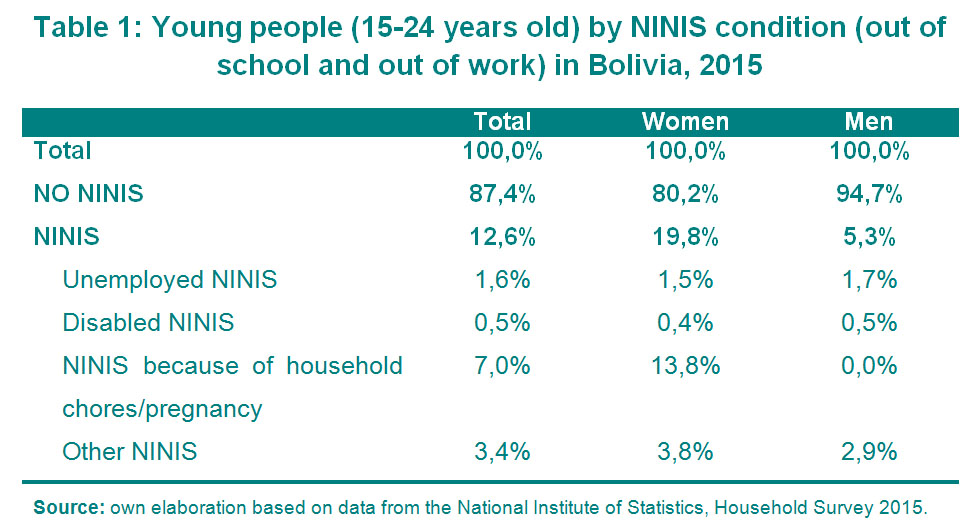 Estimations show that 12.6% of Bolivian young people (between 15 and 24 years old) were NINIS in 2015; being the percentage much higher for women (19.8%) than for men (5.3%). Many young women (70.1% of women NINIS) did not study and did not work because they were either engaged in housework or they were pregnant (data obtained from the survey question: Why do you not attend school?). These reasons classify young women as NINIS for a short run (e.g. pregnancy), medium run (e.g., caring a sick person) or long run (e.g. mother responsible for domestic tasks and childcare).

Other young people can be NINIS because of having a physical problem: 0.5% of them did not attend school for this reason in 2015. Table 1 also shows unemployed NINIS (1.6% of youth population), who were actively looking for a job during weeks or months (frictional or short run unemployment) or for more than a year (structural or long run unemployment). They certainly lacked job opportunities.

The Household Survey of 2015 still has information for understanding why the 3.4% rest of young people were NINIS. Some of them were effectively not interested in attending school or having a job, but others did not have enough resources for studying or job opportunities. There were also many other reasons: temporary jobs, participating in training courses, doing other activities (e.g. doing their military service), people injured or sick and people just coming from a trip or pretending to travel.

In short, data show the difficulties for truly understanding who the NINIS are, since the black box has many realities.

* Executive Director and Senior Researcher at INESAD. The viewpoints expressed in this blog are the responsibility of the author and may not reflect the viewpoints of all members of Fundación INESAD.

Previous Dollar Street: A virtual trip around the world to fight xenophobia
Next Neophobia

By: Lykke E. Andersen* Bolivia has recently changed from a low income country to a …