Why is it important to cooperate with Middle Income Countries?

February 3, 2014 Aid, Development, Guest Roast, Inequality, Poverty Comments Off on Why is it important to cooperate with Middle Income Countries?

In the field of international cooperation, particularly in development cooperation, much is said of High, Middle and Low Income Countries. This characterization may only seem as a way of ordering these countries. But in practice it has important consequences, as it defines the type of aid these countries receive. Donor countries base on these categories to define their aid strategies.

END_OF_DOCUMENT_TOKEN_TO_BE_REPLACED

Bolivia is a beautiful, mountainous country that is very culturally diverse but which also has many inequities. None are more pronounced that those in education: As of 2004, secondary school completion rates in urban areas were at 65 percent for men and 50 percent for women, whereas rural rates were extremely low at 20 percent for men and 10 percent for women (Ministerio, 2004). Lack of educational attainment disproportionately affects the indigenous poor. According to the National Institute of Statistics, two-thirds of rural dwellers (compared to only 44 percent of urbanites) identify with one of Bolivia’s 38 recognized indigenous groups—the largest of which include the Quechua, Aymará, Guaraní, Afroboliviano, Mosetén, and Chiquitano—and in rural areas 66 percent of the population lives below the poverty line. The Unidad Académica Campesina-Carmen Pampa (UAC-CP) is one institution helping to meet this challenge by offering undergraduate degrees to men and women from Bolivia’s rural areas. END_OF_DOCUMENT_TOKEN_TO_BE_REPLACED

UNICEF estimates that the total number of street children in the world runs into the tens of millions. A study by Toybox, a Christian charity committed to helping street children in Latin America, found that in Bolivia there are over 2,500 children living on the streets in major cities such as La Paz, Cochabamba, and Santa Cruz; that 20 percent of them had left home because there wasn’t enough food, 20 percent were abandoned, and 60 percent had been abused; that most street children are illiterate because they left school; and that 90 percent use solvents as a form of escapism. 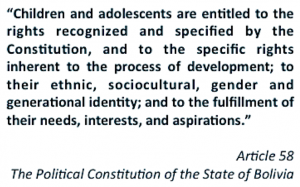 Meanwhile, these children have legal rights that are supported by the Bolivian constitution, but which are not realized in the real world. This injustice is the reason for the existence of Kaya Children International.

Kaya is a small, grassroots, non-profit institution located in La Paz. It was originally called the Bolivian Street Children Project, and was founded in 1997 by Dr. Chi Huang, who at the time was training to be a doctor in Boston, U.S.A. with sponsorship from the Park Street Church of Boston. The organization seeks to promote the development and protection of, and to restore the fundamental rights of, children and adolescents who live on the street, are in high-risk situations, or are the victims of violence or abandonment. The first home opened in 2001 as an initiative of the Park Street Church; over the next years the project grew and became an independent non-profit organization. The leaders realized that the next stage of growth was not to just build more homes, but to engage in preventative interventions to enable families to raise their own children in a better way. In 2008, to mark this stage of development, the organization was renamed to Kaya Children International. END_OF_DOCUMENT_TOKEN_TO_BE_REPLACED

What does migration have to do with on-farm conservation? A field report from the Altiplano Norte of Bolivia.

Although this fact may not be immediately obvious to most people outside the region, the Bolivian Altiplano is the origin and heart of much of the world’s agricultural biodiversity. While most Western consumers have at least seen one type of potato and some health-conscious eaters have come into contact with quinoa, most of us would have never heard of other foods such as oca, isaño, papalisa, cañahua, and tarwi. This is because these crops have traditionally been excluded by developed countries’ agricultural research and conservation activities for a number of reasons.

Firstly, past and present efforts have aimed at increasing yields and productivity of a narrow set of crops suited to high-input, high-output farming, focusing on grains like rice, wheat, and maize, which produce more than half of the global food energy needs. Indigenous crop varieties are simply less commercially viable and thus remain relatively invisible. They are rarely sold for money, but are instead consumed directly by poor, rural people that grow them in order to meet their own families’ nutrition needs. The likes of oca, tarwi, and papalisa are thus relatively unknown outside rural areas; the demand for them in urban and international markets is scarce, and commercialization is difficult. END_OF_DOCUMENT_TOKEN_TO_BE_REPLACED

The mining boom in Peru during the 1990s attracted private investment that led to current economic growth. However, this did not translate into sustainable development of the mining activities. The government has been absent in remote mining areas and, thus, corporations have been targeted as being responsible for attending to local communities’ demands and providing assistance. As a result, mining companies developed only short-term and interest-driven ‘socially responsible’ plans to continue operating. Not surprisingly, social conflict has been especially prevalent in the field of extractive industries. A shift from an extractive model to a more inclusive, participatory one—where governments and private companies work together with local communities—could create a virtuous circle of sustainable social development.

END_OF_DOCUMENT_TOKEN_TO_BE_REPLACED

Guest Roast: Why all borders are man-made: A response to DevRoast

June 13, 2013 Guest Roast, Politics, State Building, War & Conflict Comments Off on Guest Roast: Why all borders are man-made: A response to DevRoast

In historical narratives encouraged by nation states and internalized by most of us, borders often take a natural character, enforcing the nation state as a ‘natural’ and ‘inevitable’ fact. However, these narratives obscure the fact that it is the state itself that drives the process of creating, defining and consolidating borders and their adjacent areas. This article explains how and why, using examples from Europe and Latin America.

On March 28, Tracey Li wrote on the origin of borders here on the Development Roast. While the piece is both well-researched and well-written, it fails to elaborate on the centrality of states in driving the process that creates and defines national borders. Instead, agency is implicitly attributed to the (‘natural’) borders themselves: “the existence of natural borders in Europe and their absence in Africa is what makes the difference between multi-ethnic polities and ethnically homogenous ones.”

The Pyrenees between France and Spain is held up as an example of such a natural border that discourages migration and more or less naturally creates two national communities. This is incorrect: migration across the Pyrenees and around the region was common for centuries before the national border was determined. The evidence of this is clear: the Occitan language spoken in the south of France and Catalan spoken on the “Spanish side” of the mountains are closer to each other than either is to French or Spanish (or Castellano, as the Catalans call it) respectively. END_OF_DOCUMENT_TOKEN_TO_BE_REPLACED

The death of Hugo Chávez rocked the world of international relations. As foreign governments scrambled to make public condolence statements, the world remembered just what a controversial figure Chávez was. While he was adored by the Venezuelan people, he was a thorn in the side of Western governments. He was also a close personal friend to remarkably controversial leaders like Fidel Castro, Mahmoud Ahmadinejad, and Muammar Gadhafi.

Amidst the demonization of America and capitalism, Chávez kept the world watching Venezuela. His unrelenting criticisms of the Western imperialist powers got him significant attention from Western governments. His alliances with staunchly anti-American states like Iran, Belarus, and Syria gave him both power and influence in the international system. Chávez shaped a new, more powerful Venezuela.   END_OF_DOCUMENT_TOKEN_TO_BE_REPLACED

Guest Roast: Good Governance and Development – Which causes which?

The international development community has for almost two decades focused on improving governance as a strategic priority for aiding economic growth. This article points to the historical record and argues that 1) growth does not require good governance, 2) good governance and representative institutions are products of economic development – not the other way around, and that 3) the configuration of national institutions determine whether a political order will produce developmental outcomes or not.

‘Good governance’ has been a mainstay component in most donor-funded development programmes during the last two decades. What exactly constitutes good governance is empirically problematic, but while implementations vary, demands for good governance generally include provisions to minimize graft and increase respect for human rights.

END_OF_DOCUMENT_TOKEN_TO_BE_REPLACED

For the past three years, I have been studying the lives of long-term sickness benefits recipients in North East England, U.K. as part of my PhD research. In that time, government policy has increasingly distinguished between the ‘deserving’ and ‘undeserving’ in relation to sick and disabled people. Yet it is not only policy that makes that distinction.

In recent years, the media have taken a more vitriolic stance towards sick and disabled people, often branding them deeply offensive terms such as ‘scum’, ‘feckless’, and ‘work-shy’ (Garthwaite 2011). A comparable discourse is evident not only in political debates and the mass media, but also when considering public opinion. Polls show unsurprising support for welfare reform plans, signalling the public’s negative view towards benefits and people who receive them. For example, an IPSOS Mori poll carried out for the BBC published in October 2011 revealed that although a resounding 92 percent of British people wanted a benefits system providing a safety net for all, 63 percent doubted the U.K. benefits system works effectively, 72 percent wanted politicians to do more to cut the benefits bill, and 84 percent wanted to see stricter testing for sickness benefits. END_OF_DOCUMENT_TOKEN_TO_BE_REPLACED

Guest Roast: Poverty – Who is to blame?

Who’s to blame for poverty?  Is it the poor themselves?  Or society?  Or is it just bad luck or fate? Just over forty years ago, American sociologist Joe Feagin asked over a thousand Americans and found that 53 percent blamed the poor themselves, 22 percent blamed societal factors and 18 percent put poverty down to fate (1972). In a very real sense people were prepared to blame the victim. The tendency to blame the victims of poverty for their own fate is similar to what Melvin Lerner (1980) has called the belief in a just world – the Just World Theory – where people get what they deserve and deserve what they get. Thus if a person is poor they must somehow have deserved that poverty.

Does it matter what explanations people give for poverty? END_OF_DOCUMENT_TOKEN_TO_BE_REPLACED